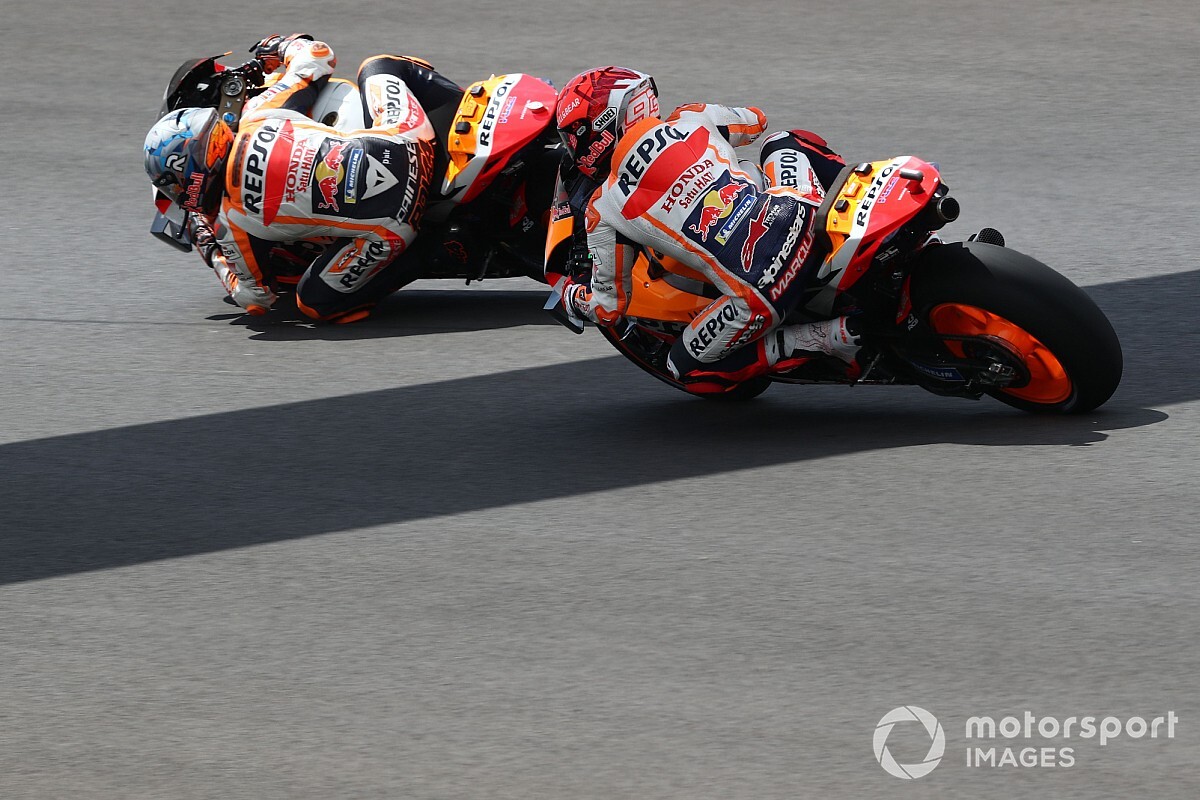 Six-time MotoGP world champion Marquez returned to action after a nine-month injury layoff last time out in Portugal, qualifying sixth and riding to seventh in the race.

That was the best result for a Honda rider so far in 2021, with Espargaro managing an eighth in the Qatar GP as he continues to adapt to the RC213V after a limited pre-season.

LCR’s Alex Marquez admitted in Portugal that his brother was already showing the other Honda riders the way to ride the bike, while Espargaro noted his return was “important” for the team.

However, he doesn’t feel his own results this season on the Honda will be bound to how well Marquez is doing on the same bike.

“I think when one is fast in the team it puts pressure on all the rest,” Espargaro said when asked if Marquez’s return brought added pressure.

“At the end my pressure does not change because Marc is doing better or worse results.

“I mean, I think the one who is putting pressure on myself is me. I’m just pushing myself in every session and I know when I’m fast and when I’m slow.

“For sure there’s going to come days when maybe Marc is going to destroy me, I gave my all and I know I couldn’t give more and I’m going to be happy… kind of happy.

“And then it’s going to be the case that hopefully I’ll be close to Marc, I felt I could do more and I will be angry.

“So, my pressure won’t change with the results of Marc.”

Espargaro says his struggles at the start of the year after a strong showing in testing are down to the fact the conditions across the Qatar double-header and the Portimao weekend were so changeable that he couldn’t properly work on the bike.

But with MotoGP returning to Jerez for the Spanish GP this weekend, he wants this to mark the point where his season truly begins.

“We were making so many laps, the track had a lot of rubber [down] and I took the first test to come, but the second test in Qatar was very good, the track was very constant conditions.

“What happened in Qatar [races] was the track was changing a lot with the rubber from Dunlop, plus the hot and the cold.

“So, the changing conditions on track was making me make a lot of mistakes.

“And then we moved to Portimao, FP1 was mixed, then FP2 we start to be fast. We didn’t have a full dry session to match all the sessions and work with the bike.

“So, what I’m missing is a place like Jerez, with constant conditions, constant weather, a place where I know.

“It’s been three races but in two circuits, but these two circuits have been very difficult for me and Honda.

“So, I want to take this race as the beginning of our season and start from here with a very positive and open mind.”