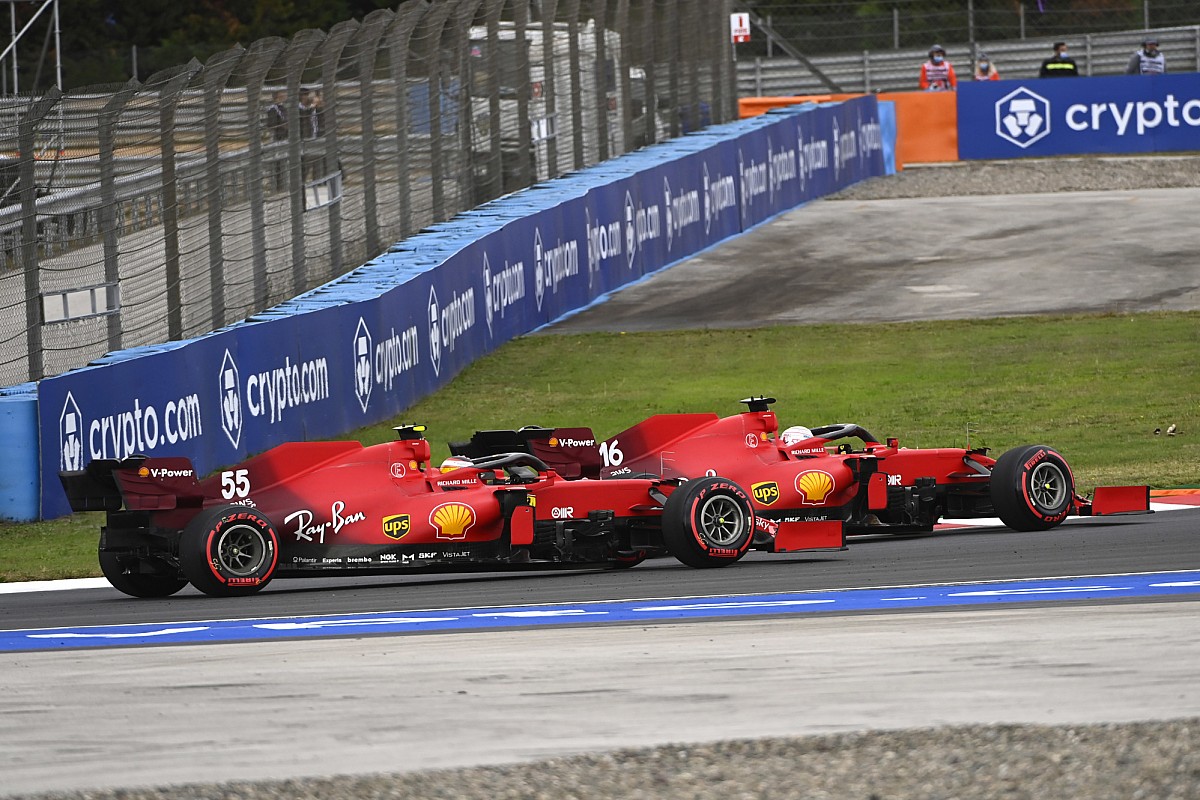 The Italian car manufacturer elected to hold fire on introducing some upgraded 2021 power unit components until the second half of this season, so it could maximise development time with an engine freeze in place.

The final go-ahead for the developments was given at the Russian Grand Prix, as Charles Leclerc took a grid penalty for fitting the improved power unit.

Last weekend in Turkey, Carlos Sainz followed suit and started at the back of the grid before making a strong recovery through the field.

With Ferrari having seen an upswing in performance, as Leclerc challenged for a podium at Istanbul, the team’s hopes of beating McLaren to third place in the constructors’ championship have been boosted.

For team principal Mattia Binotto, the extra power that is on hand now is a secondary consequence of what was originally a learning exercise for 2022.

And he says there was an element of risk in Ferrari pushing to go with the engine as soon as it could, rather than waiting until the closing stages of the campaign.

“When we introduced it in Sochi, the first objective was to try to increase our experience in the view of 2022,” explained Binotto.

“That’s why we introduced it as soon as possible, trying to rush it, taking some risks as well, but it’s all a risk assessment.

“Obviously for us it’s clear to get mileage on-track and do our own experience before 2022 where the power units will be frozen. For us, that was the key and the reason of that.”

With things so close between Ferrari and McLaren, as just 7.5 points separate them, any extra performance could prove critical in their fight for best of the rest.

Binotto said the power boost from the new engine was not huge, but it was definitely worth going for.

“It is giving us a small advantage, but I don’t want to quantify it on lap time because it is track dependent,” he said.

“It’s not only pure ICE power, it’s energy recovery, so it’s a bit complex. But certainly it’s giving us an advantage.

“If I look as well at qualifying with Charles, he had the fourth best lap time, and if I look behind him, it was very close. I’m pretty sure that a couple of positions would have been lost without that specification.”

Listen to this article Work is now underway on Club Moolia, which is set to become the Asia Pacific region's...

Listen to this article NASCAR's updated penalty system includes much harsher consequences for violations, including the revoking of playoff eligibility. ...

Listen to this article As previously reported by Motorsport.com, NISMO will run two of the four new Zs that will...

Manchester City are set to confirm the signing of Argentine starlet Julian Alvarez, 90min understands.We revealed earlier this month that...

Paris Saint-Germain midfielders Georginio Wijnaldum and Julian Draxler are open to being part of a loan swap deal that would...

Newcastle United have made a fresh move for Jesse Lingard and have offered Manchester United £10m to loan the England...