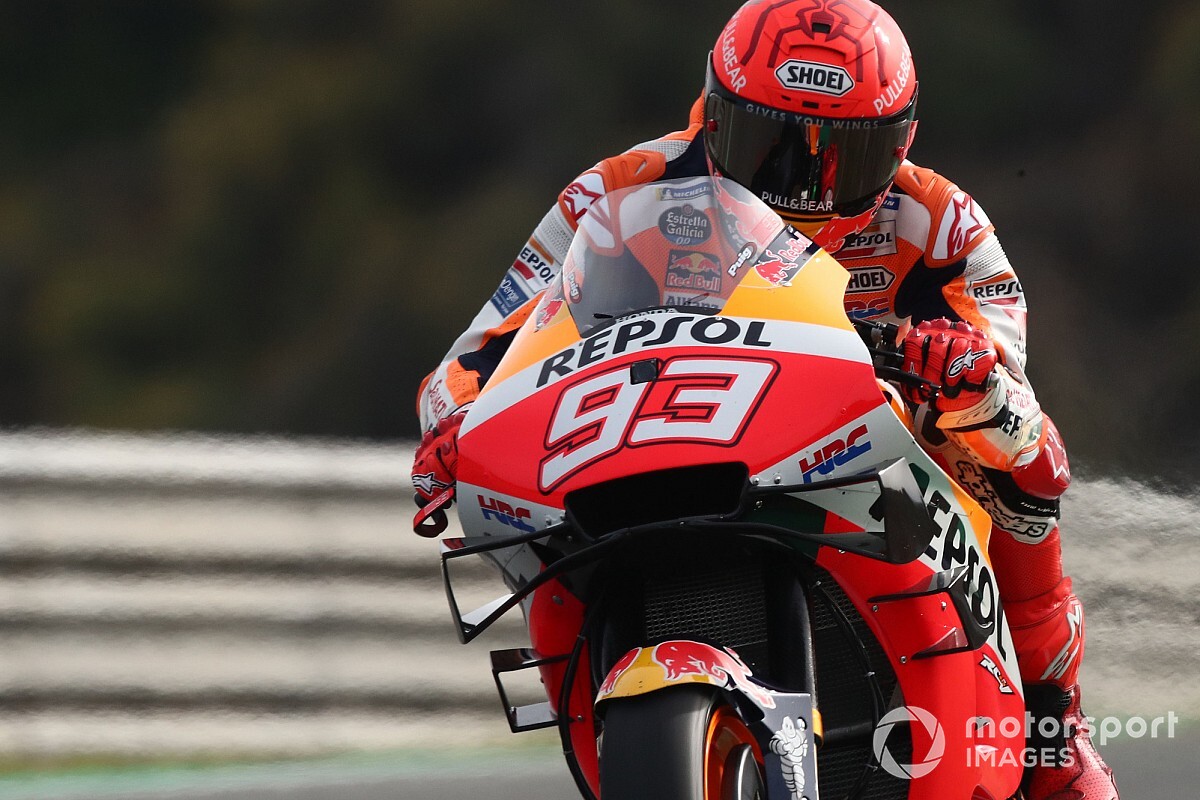 The six-time MotoGP world champion broke his right humerus in a nasty crash at the Turn 3 left-hander in the 2020 season-opener, which began an injury layoff that would continue until the Portuguese GP a fortnight ago.

Marquez elected against a time attack run in FP2 and ended Friday 16th overall, but admitted he had no issues riding through the corner that ended his season in 2020 – even noting he was the fastest Honda in that section in FP1.

“I checked the data today, especially after FP1 because after FP2 I didn’t have time,” Marquez began.

“But in FP1 in Turn 3 and Turn 4 I was the fastest guy in Honda, it’s left corners, it’s corners I love.

“Maybe on the first lap I passed there I was maybe a little bit [steady], but since that point I ride in a normal way and I was the fastest guy of Honda in that particular corner in FP1, in FP2 I didn’t check.

“But also, T1 [sector one] is my strongest at the moment, that corner is in T1.

“So, there was no problem to ride on the mental side. You don’t need to be scared about the moment.”

Marquez says his decision to forgo a time attack in FP2 was down to him wanting to preserve energy for Sunday’s race, having felt a lack of “power” in his right arm after a trouble-free FP1.

Despite this, he notes he is able to push his arm when he needs to and admits he feels better after Friday at Jerez than he did after the first day of running in Portugal.

“Today I was so concentrated from FP1 to FP2 how the evolution of my body was and in FP1 immediately I felt ok,” he added.

“Then immediately in FP2 I felt that something was changing, and in FP1 I was able to ride how I wanted with the elbow.

“I was playing with the body, but then suddenly straight away in FP2 I go out and I felt something like I was not riding like always.

“And then just I did a few laps just riding to understand my position on my bike and immediately I feel a lack of power in the muscle, especially in the triceps, the shoulder on the back, lack of power and the position of the elbow was not the same [as in FP1].

“But today my approach was totally different to Portimao.

“In Portimao I started Friday and then I give, not everything, but I pushed all the laps and I was riding good and today I felt okay.

“But just I was riding, pushing a few laps, not pushing on the new tyre because you stress more the physical condition.”

May 9, 2021 sportsgamingwire
[embedded content] FightHype.com was on hand at AT&T Stadium in Arlington, Texas where multi-division...