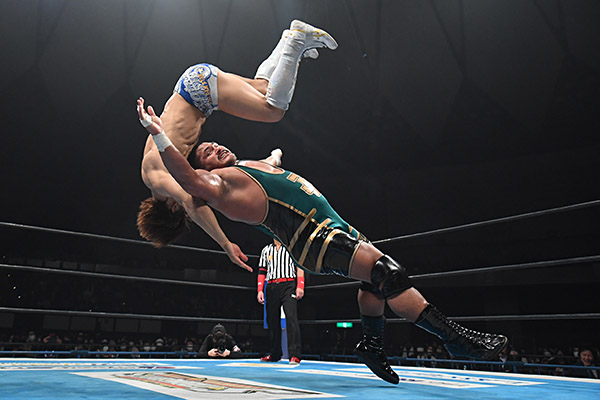 Our Match Could Be Your Life: Scenes from the New Japan Undercard, April 29th 2021

What To Look For

It’s balls! Why? I’ll tell you why. Because it’s BALLS, that’s why. Complete BALLS. Balls in the sense of balls.

Toru Yano is grating, dreadful, loathesome, debilitating, catastrophically stupid, a worthless chore, a liar, a humbug, a hypocrite, a vagabond, a loathsome spotted reptile and a self-confessed chicken strangler

Here are the timestamps and descriptions of every encounter between Naito and Ospreay in this match (timestamps for Japanese VOD):

It’s starting to make one ruminate on whether Will might hold this title until Wrestle Kingdom and face Naito there… ether way, these are the things this company does to subtly inform its audience that a specific match-up is a very big deal, and why I’m not ready to say they’ve lost all the velocity on their fastball just yet. People were asking questions about Clayton Kershaw too, remember.

This one was exceptionally worked and while the length confuses me, it didn’t feel superfluously long. The crowd was clap-hot for Naito, and this diffused to every other wrestler in the match, and one has to wonder if the wiser scheduling decision would have been to main event Night 1 with Naito-GOK and put the Junior tag titles as the April 26th main event. Naito v. Great-O-Khan would have been exponentially more ebullient with this Kagoshima audience.

One thing that I love about Naito and O-Khan’s sequences is their artful similarities, as Naito pointed out in backstage comments. It’s understated, but even the way they execute moves is similar. One is reminded of this when observing O-Khan deliver some of his power slams and throws. There is a delay, a sustained pause as he holds his opponent up, specifically that move he does where he lifts his opponent into a back suplex, and then drops them face first to the canvas. We see Naito do similar things, like how he hangs in the air during the final leg of the Combinación de Cabrón. It appears like Naito simply enjoys himself too much interacting with this guy, and I maintain hope this evolves into a legitimate rivalry.

I am developing a new concept around Will Ospreay’s character, where he is aggressively, relentlessly annoying, in large part because many people find him legitimately annoying in real life (which itself is probably a severe downplay of how many feel about him). Will talks a lot, he claps a lot, he struts a lot. It’s annoying. Engulfingly annoying, and inescapable.

It is not go-away heat, though. It’s something different. Will’s posturing doesn’t make me want to turn away, but I also don’t revel in it either, as I do with KENTA, the greatest professional wrestling performer alive, or Jay White, or wrestlers of that ilk.

Will Ospreay is an Endurance Heel. He has Endurance Heat. I find him insufferable, on both real and fake levels, but he doesn’t make me want to stop watching, but I’d rather not watch him, but I don’t care enough to want him to go away, either; I endure him for the results the are achieved. And when the opponent is Shingo, I’m willing to put up with a lot, as when he faces Ibushi, or Okada, or eventually Naito. And his backstage comments have significantly improved, in large part because he has simplified them considerably. They are forthright and deliberate.

In his sequences with Shingo, they move at a breakneck pace, and thankfully there is a purpose to Will’s obnoxiousness;  these demonstratively aggravating mannerisms usually predicate his selling.. He acts like a fool, and then exhibits equally exaggerated shock when someone turns the tide on him. Shingo plays his part well, partly exasperated and partly unenthused by Will’s behavior.

It also helps that they continue to deliver astoundingly intricate sequences, replete with reversals, counters, and feats of physics repudiation that are marvelous to behold, but also refrain from empty movements. Everything seems logical and administered with the intent to land. I chronicled one of these sequences on the April 26th show.

Shingo put away O-Khan and now the tour has been bookended. It began and ended with Shingo pinfalls in LIJ v. UE tags, with a ton of UE wins in-between. Shingo is a perfunctory challenger, that much is obvious, but he’s so fervently zealous, so intensely passionate, it’s hard not to be drawn in. ***3/4

Kota Ibushi is the best wrestler alive and possibly the most versatile we’ve ever seen, something on full display and confirmed in his 2020 G1 Climax performance. You can save the limb selling hogwash; go put it in a ledger and drop it in the Registry of Historical Facts. You’d be shocked into shame to discover that momentum overrides realism.

Ibushi’s return here was exultant, and the crowd was absolutely clap-molten, just consistently loud the entire match. In the last match, they were loud for Naito and that carried over, but in this match they were that level the whole goddamn time.

It’s hard to say that Ibushi looks any different or exhibits any differences… he’s been gone for less than a month. He seems refreshed, for sure. Ibushi’s sincerity has been sorely missed, certainly. But there seemed to be an organized talking point here, one reiterated by the commentary team, the post-match reporters, and Tanahashi himself: “Wow, is this the same Ibushi?” Or, alternatively, “The old Ibushi is back!” Of course, let’s ignore the idea that an “Old Ibushi” wouldn’t need resurrecting if they would have booked the New Ibushi coherently.

But despite the fact that Ibushi has only been absent a month, it feels like he’s been gone for years. Maybe because New Japan squeezed what felt like several years worth of shows and content into that month, and thus Ibushi’s return felt legitimately affecting. We also were treated to the return of the goofy energy that Ibushi exhibits when around Tanahashi, which we only really saw emerge during his title reign during those ludicrous backstage segments he had with SHO and Hiromu.

And so, goal #1 of this match was accomplished: re-introduce Kota Ibushi in the most propitious circumstances.

Goal #2 was also accomplished successfully: enact the Ibushi-Cobb program in a way that suggests a legitimately great singles match in the future.

That goal was achieved literally 2 seconds into the opening bell, as Ibushi and Cobb cleared out their partners and agitatedly awaited Unno’s signal. They sprinted towards center-ring, evaded each other, and then unleashed a ferocious torrent of strikes. It was a perfect rendering, and instantly reminded everyone that Jeff Cobb, for some reason, abhors Ibushi and obliterated him after Ibushi’s title loss at Sakura Genesis. And it reminded us that Ibushi, whatever stance you hold on the capacity of his brain system, very much remembers that ignominy.

The match is going to rule. Cobb is going to toss Ibushi all over the ring, and Ibushi is going to light Cobb up like a heavy bag because he kinda is one. If I wasn’t wearing my glasses, you could easily convince me that Jeff Cobb is literally a heavy bag hung from the wall.

Ibushi, of course, looked spectacular. He even broke out the standing corkscrew moonsault, and I can’t even recall the last time he’s pulled that one out of his bag of tricks. Cobb looked sensational as usual since last year’s G1 Climax (and that pre-dates his turn, don’t let anyone re-write this history). Their G1 Climax match was one of Ibushi’s lesser matches of that mind-blowing month-long genre hopping exercise he legislated, but it was still a fun 10-minute match.

Belligerent Jeff Cobb vs. Barbarous Ibushi (knee-pads downs from the start) is going to be phenomenal.

One would presume a third goal, a sub-goal, and that was to rehabilitate Henare a bit after his loss to SANADA. It turns out that goal was theoretical, and possibly never even considered. This one was more of a mixed bag. By having Henare work Tanahashi, Henare was offered a chance to control the match, as everything built towards hot tags to Ibushi. There were moments when the two looked very smooth, but for the most part Henare just worked over Tanahashi’s leg. It helped firm the notion that Henare is a precision killer, but in a tag match it just meant that he ate up the time, though he did do it well.

Henare looked alluring against Ibushi in their brief exchanges, however. It was brief, but there was a blistering strike exchange between the two, the kind that makes you wonder what they will eventually pull out in a full singles match. If both are trained in actual striking sports as deeply as has always been reported, and it sure seemed like it from some of the strikes they were showing here, both from a technical side and a blocking aspect, we may get some kind of Fedor v. Cro Cop match-up.

Is Henare ok? Is he just a loser wearing sunglasses indoors and Orenthal-fitted gloves? No, that’s not true. He’s going to eat a lot of falls coming up, and sure, on paper that’s going to look like a mere continuation of his character pre-Empire. But watch this backstage comment. This Henare feels different. “It never felt so good to lose:”

All this is to say that this was an invigorating tag team exhibition with a noticeably engaged and clap-clamorous audience. It ended with a sensational sequence. Henare found himself at a disadvantage, so he started striking out, initially gaining the upper hand. He dropped Tanahashi with that phenomenal left hook to the body, but when he hit the ropes and bounced back, Ibushi was waiting with a perfectly timed jumping knee. Fucking awesome. It further took a Slingblade, an Aces High, and a Kamigoye to finish him off… if that matters. I think wins and losses are less important than look and posture at this point for Henare. Perhaps I’m insane here, which might be confirmed by the amount of words I’ve committed to this company in their coldest year in over a decade, BUT… ****

Of note: Ibushi’s backstage comments were tremendous, really getting across the idea that even someone as gifted as Ibushi, a statue from antiquity come to life, he can still feel envy, and someone with an Olympic background and caliber such as Jeff Cobb’s makes him envious. It’s much longer than the usual backstage deal, but it’s well worth watching just to see how subdued Ibushi is for most of it, just in case we needed to recall how endearing this SOB truly is.

If anything gets across the idea that Ibushi seems different than he did a whole 26 day ago, it is this backstage comment video. He appears tranquil but sagacious, serene and equanimous, a quietly percipient roshi:

We cannot wholesale recommend this show. In fact, considering that there was a distinct lack of immediately consequential results from the top two tag matches, we cannot generally recommend it. However, the semi-main and main event tag team matches were excellent, involving some of the best wrestlers the company has to offer, and some of the hottest in this ice cold company (in the West). If you want to forget about the contextual nonsense that has eroded both confidence and interest in this company, and just watch a couple of matches that will remind you of the caliber of this roster, then we do, indeed, recommend watching the final two matches.