On qualifying day at Autodromo do Algarve, Dieter Rencken took the opportunity to enjoy a close-quarters view of the action which remains unavailable to fans, as races remain behind closed doors.

Back in the paddock, Mercedes and Ferrari are at odds over the content of a recent discussion over how F1’s financial rules will be enforced. And for Alfa Romeo, Kimi Raikkonen’s lap one retirement was only the beginning of his woes.

Driving to the circuit at 9am a slight drizzle hits the area and I wonder whether it will may blight – or enliven – the day’s proceedings, but the air is dry when I arrive, and remains that way for the balance of the weekend. However, the wind has picked up since Friday, pointing to some tricky conditions for drivers over the next two days.

Shortly before midday I grab my (pre-booked) tabard and head trackside, starting at turn four, conveniently situated 200 metres from the media centre. I marvel again at the braking capacity of modern F1 cars as they hurtle towards the hairpin at what seem impossible speeds before their drivers modulate the left pedal through to the apex. Then they rocket up the hill, tails snapping as the rear wheels grapple for grip.

The Red Bulls look most planted, followed by Mercedes and McLaren. Haas drivers Mick Schumacher and Nikita Mazepin struggle the most from turn-in through apex to exit. Although the turn provides only a brief snapshot of relative performances, that’s roughly how it pans out – give or take the odd lap time deletion due to track limits – during the later white-knuckle hour. 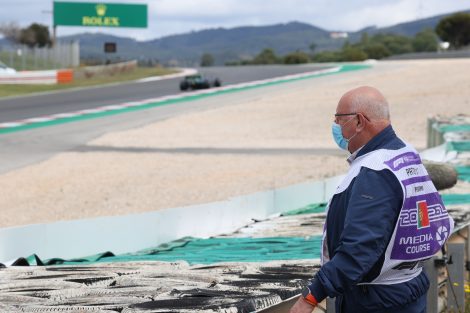 From turn four I walk up the hill to turn eight, which provides marvellous views of cars cresting the previous brow, seemingly poised for take-off. I’m reminded of photos of the Nürburgring’s Flugplatz, where Manfred Winkelhock’s March became airborne during a F2 round in 1980 and later ask Pierre Gasly whether his car goes light at that point, to which he replies in the negative. Clearly it appears more dramatic than it is.

After a handful laps I follow the track layout, stopping at each corner for comparisons, and am again amazed at how visible the differences (and engine sounds) are, yet ultimately we’re talking a few tenths of a second per corner between best and tail-ender. TV shots seldom fully convey such tiny variances, which add up to two seconds or more over a lap, nor do they illustrate the full extent of elevation changes. More’s the pity. 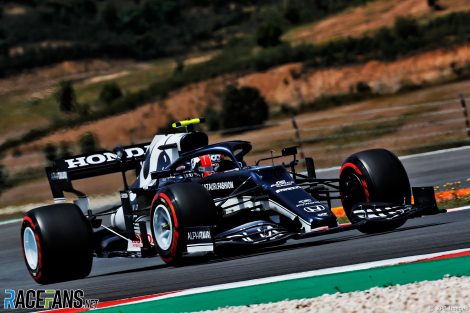 After lunch in the circuit canteen – steak and fries with veggies – I hit the mixed zone for catch up chats with various team personnel, mainly following up on items from last Monday’s F1 Commission summit, which appears to have been fairly contentious. While F1 makes much of its (apparent) unity – with the term ‘unanimous agreement’ regularly appearing in media releases – is seems considerable acrimony reigns between teams and their bosses.

Post-qualifying I’m back in the mixed zone, this time to catch drivers who do not have separate team media sessions scheduled. I’m again particularly impressed by Yuki Tsunoda, who handles the tough task of answering hard-nosed media questions with aplomb despite his youth and foreign language obstacles. After his superb debut in Bahrain the realities of F1 have bitten back, and he’s learning fast. Daniel Ricciardo, too, is good value, opening up about his continued struggles after being eliminated in Q1.

Having quoted Mercedes boss Toto Wolff’s comments made during his Saturday media session I’m called by Ferrari who wish to set their side of the record straight, and we in turn report Mattia Binotto’s version. These later draw a rebuff from Wolff, and in his post-race session Binotto reiterates his stance. It seems this tiff will run a while. 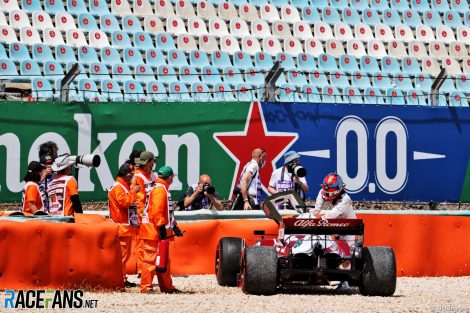 The other pre-race excitement is Alfa Romeo’s review hearing. We’re amazed at a) the paperwork involved in convening the re-opened the case – Kimi Raikkonen was penalised in Imola over what his team views as conflicting regulations – and length of time it took to reach the (unchanged) verdict, eventually handed down two hours after the race despite the hearing staring before noon. Things need to be done thoroughly, but still…

On a thoroughly miserable weekend for the veteran driver, Raikkonen’s 332nd race ends when he tags his team mate at the start of lap two.

The manner in which drivers conduct themselves post-race sessions provides perfect character case studies for psychologists: all the highs and lows of competing at this level are laid bare as drivers provide reasons as to why the won or lost or crashed, with the performance of a team mates drawing comparison benchmarks. Over time one recognises the same-old, same-old reasons provided whenever drivers are beaten by team mates.

After the last of the sessions – Ferrari’s at 7pm – I head for the car park and my 70-kilometre drive to a B&B for two nights en route to Lisbon and a flight to Barcelona on Wednesday. As outlined in my previous diary edition, the Portuguese government relaxed restrictions across the country save in eight regions, including Portimao. As luck has it, my (pre-booked) accommodation lies outside of these, so I can enjoy the pleasure of dining in open restaurants until I depart for this weekend’s race.

Chat again from Spain. Take care until then and stay safe.