By Brad Slotnick: Former WBO heavyweight champion Joseph Parker was surprised at Derek Chisora’s mind games on Thursday during their face-off during the press conference for Saturday’s fight at the Manchester Arena in Manchester, England.

Initially, Chisora stood far apart from Parker, facing him. The next thing you know, Chisora moved quickly to stand face to face with Parker at close range.

At that point, Chisora put his arms around Parker and held him like he was his girlfriend, causing him to laugh. Chisora grabbed Parker’s hands and placed them around his shoulders to hold him in an embrace.

The whole time, Parker was smiling but going along with it in one of the weirdest face-offs you’ll ever see. At least Chisora didn’t kiss Parker on the mouth the way he did with Carl Baker in their fight in 2010.

That was back in the days when Chisora would do crazy things during face-offs. He slapped former WBC heavyweight champion Vitali Klitschko in the face during one of their faceoffs in 2012.

Saturday’s Parker vs. Chisora fight will be the main event for DAZN and Sky Box Office. It’s an important fight for both guys, particularly Parker, because he wants to get in a position to fight for a world title.

“There’s no secret what he wants to do,” said Parker to Behind The Gloves on what Chisora’s plan for the fight. He wants to apply pressure from the beginning, and as Buddy McGirt mentioned, he wants to punch me on the thighs. 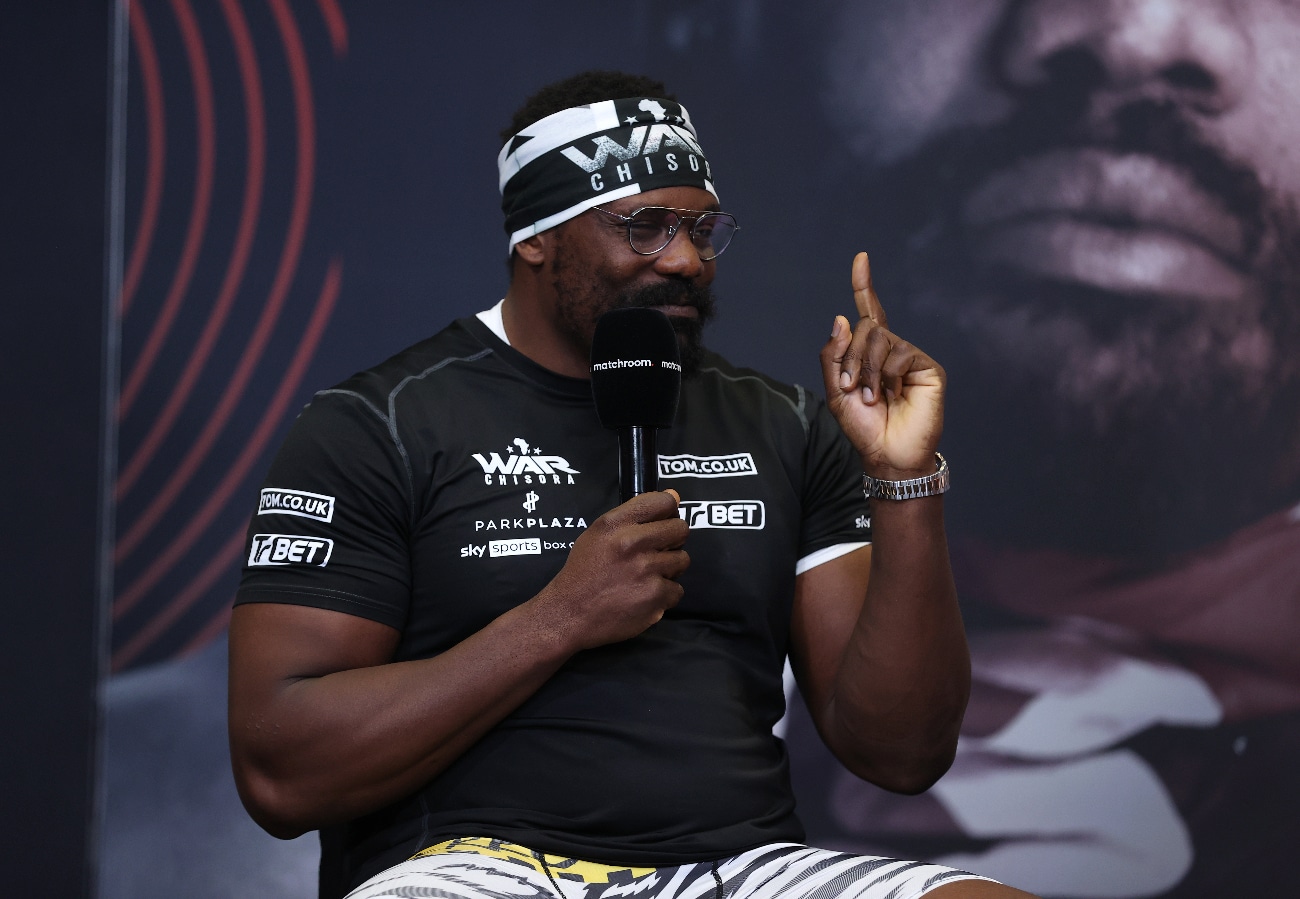 “Listen, I think he’s going to do every single thing within his power to win. If he does it once for me, I’m going to do it straight back.

“My job is to executive my plan and Andy’s [Lee] plan that we have in place. Box smart, but we feel we can catch him pretty good. One punch at the right time with the proper technique can do the damage,” said Parker about his plan to hurt Chisora.

Getting punched in the thighs could take away Parker’s ability to move and hurt his punching power. Parker says he’s going to use the same tactics as Chisora if he starts using different fouling tricks.

This writer has never seen Chisora punch his opponents in the thighs, but he’s thrown many rabbit punches during his career.

That’s probably the most dangerous punch that Chisora has in his arsenal, as he likes to throws that shot frequently. Like Tyson Fury, Chisora uses his rabbit punches as his key shot to win fights.

Derek will use continuous pressure

“Andy isn’t trying to change the whole script,” said Parker about his new trainer Andy Lee. “We haven’t had a lot of time to train together. We adjusted a few things that he feels will be beneficial for the fight. 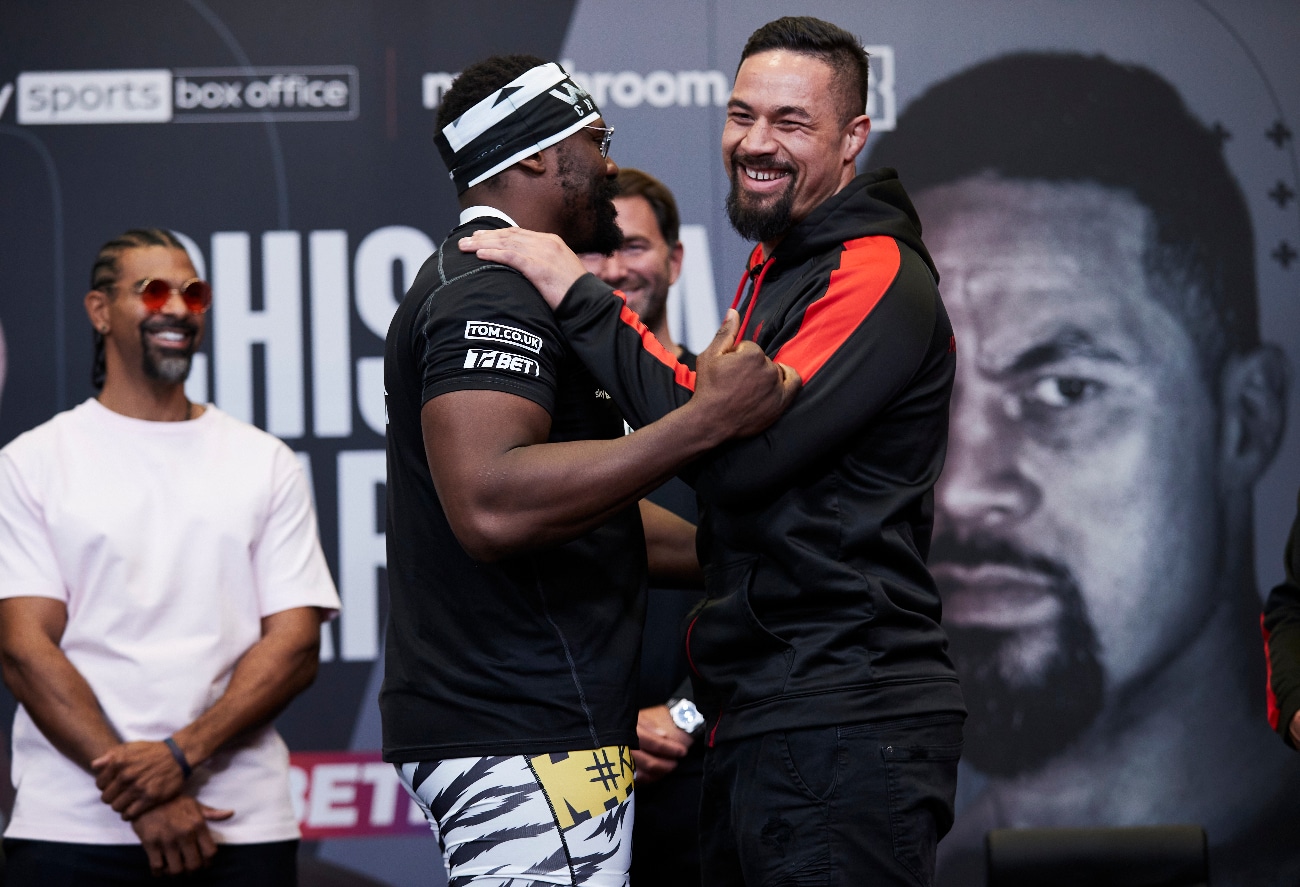 “My goal for this fight is to do my best. If I perform how I did in training, I can get him out of there. That’s the most important thing now. Bring everything we’ve done in the gym to the fight.

“I feel like the fight was great,” Parker said about Chisora’s performance against Oleksandr Usyk last October.

“And I know he got caught a few times in the mid-rounds, but he never stopped, and he never gave up. I believe that’s how he’s going to be for this fight. I have to give him something to think about,” Parker said.

Chisora will fight the way he always does by applying pressure and forcing Parker into a war. Early on, Chisora will give Parker a lot of problems for the first six rounds.

If Parker can withstand the early assault from the 37-year-old Chisora, he should be okay in the second. At this point in Chisora’s career, he’s a six-round fighter. He doesn’t have the stamina to fight hard beyond the sixth.

Parker’s stamina looked poor in his last fight against Junior Fa, and he was fortunate to win that fight. Surprisingly, the huge 6’6″, 260-lb Fa had the better hand speed and combination punching.

What cost Fa the fight, though, was all the holding he was doing. If Fa had resisted his urge to hold, he likely would have won because Parker was sluggish throughout.

Parker doesn’t want the fight to go to the cards

“Usually, when you look for it, it doesn’t happen. I’m just going to go let it flow and fight and box how I’ve been doing in the gym. I feel like if I do that, it might come.

“But if I come looking for it, it probably doesn’t even come. So like my last fight [against Junior Fa], it wasn’t my best performance,” said Parker.

“I want to make it right by putting on a better performance this time. I feel like I’m coming in at a similar weight as my last fight or maybe a little heavier.

Not your typical main event face off 😅#ParkerChisora this Saturday! pic.twitter.com/finULZ3GXU

“Eddie [Hearn] brought some guys from the UK, three or four guys, and they did some great work,” said Parker when asked who he sparred to get ready for the Chisora fight.

“Whatever is available, I’ll take, but for now, I’ve got to focus on the guy over there,” Parker said when asked if he’ll look to fight for an interim title if he’s successful against Chisora.

It would be a good idea for Parker to look to a knockout in this fight because he might be at risk of losing if he doesn’t score a stoppage. We saw Parker lose a close decision to Dillian Whyte in London, England, in 2018.