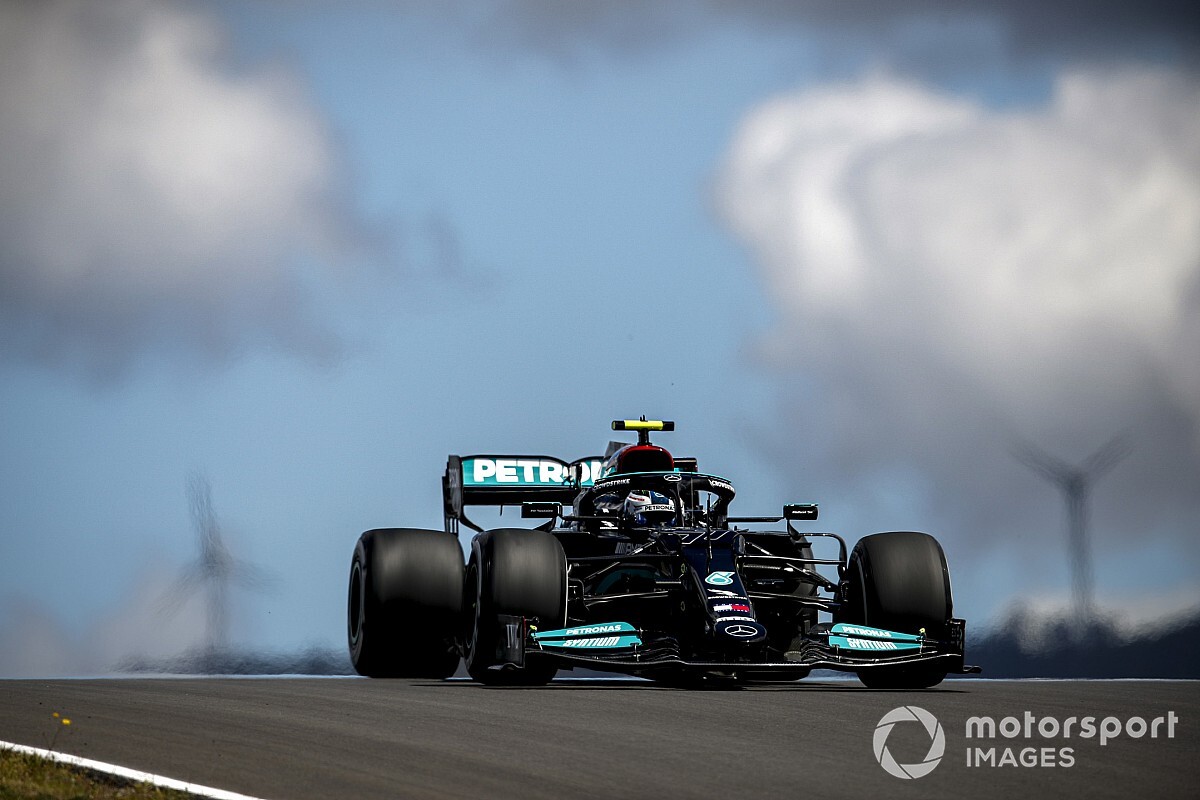 The pair traded fastest times throughout the opening practice session, while Lewis Hamilton finished fifth after complaining of a balance problem early on and then failing to string a flying lap together on the softer tyres in the closing stages.

When the session got underway, Bottas was first to take the track, followed by Sergio Perez, who was initially running a large aero rake at the rear of his Red Bull.

Bottas therefore set the early benchmark at 1m23.778s on the hard tyres, which most of the field used for the first half of the 60-minute session.

The smooth, low-grip surface meant the drivers were finding time the longer their runs went on, with Bottas soon lowering the fastest time to a 1m22.938s.

Hamilton then jumped ahead with a 1m22.772s, also on the hard rubber, but was soon back in the pits complaining that the balance on his W12 was “undriveable” and that Mercedes had to make some “serious changes”.

Carlos Sainz went fastest as the opening 10 minutes ended, before he was usurped by Bottas’s 1m21.829s, which brought the Finn’s long opening run to a close.

Nearly 10 minutes later, Daniel Ricciardo put his McLaren quickest with a 1m21.821s, before Verstappen put in his first flying effort of the event just past the 20-minute mark having started his session much later than most.

Verstappen duly went to the top of the times with a 1m21.053s – which would have been faster had he not had to catch his car snapping left while running through the long, downhill right-hander of Turn 14 – where Ferrari’s Charles Leclerc had run out wide over the large run-off area during the early stages.

Bottas retook the top spot with 1m20.506s when he reappeared again on the hard tyres, which stood as the benchmark over the session’s halfway point before Verstappen lowered it twice, first with a 1m20.500s then a 1m20.318s on consecutive runs – despite complaining of struggles at the tight Turn 3 right “every over lap”.

Shortly after this, Bottas switched to the soft tyres for the first time and quickly retook the top spot with a 1m20.221s, where he shipped time to Verstappen in the middle sector.

Heading into the final 10 minutes of FP1, Verstappen also switched to the soft tyres, but ahead of his flying lap he complained of severe vibrations coming from his tyres, even suggesting he could not see properly as a result.

Red Bull offered to bring him in on safety grounds, but Verstappen joked he would “just visit the dentist after the weekend” and continued onto his flying lap.

Despite the issues, Verstappen set purple sectors in the first two thirds of the lap, but lost time to Bottas in the final sector and wound up 0.025s adrift, after which he pitted to get his tyres checked.

Perez slotted into third late on to finish 0.198s slower than Bottas, with Leclerc also improving as the clock wound down to put his Ferrari fourth.

Hamilton’s session finished with several attempts at a flying lap on the softs, with which he would regularly set the fastest time in the first sector before losing time in the middle segment and then aborting his runs.

He therefore ended up 0.319s slower than his teammate’s best time, with his best time on the softs coming in at 1m19.967s – the final lap under the 1m20s bracket.

Pierre Gasly took sixth for AlphaTauri ahead of George Russell, who backed up Williams’s strong practice form at Imola with seventh.

Lando Norris took eighth for McLaren ahead of Sainz, while Esteban Ocon rounded out the top 10 in his Alpine.

Sebastian Vettel provided some comic relief halfway through the session when he briefly parked up at the McLaren pits, where he had been used to stopping with Ferrari in 2020, before rolling up to his Aston Martin garage and apologising to his squad.

He finished P16, one spot ahead of Callum Ilott, who made his F1 weekend debut in place of Antonio Giovinazzi and finished two places behind Kimi Raikkonen in the other Alfa Romeo.