Featured at Thursday’s press conference and competing in pay-per-view action were former world champion Omar “Panterita” Figueroa Jr. and Abel Ramos, who meet in the co-main event, sensation super welterweight Sebastian “The Towering Inferno” Fundora and Jorge “El Demonio” Cota, who face off in a 12-round duel, and rising unbeaten Jesus Ramos and Olympian Javier “El Intocable” Molina, who battle to kick off the pay-per-view at 9 p.m. ET/6 p.m. PT.

The press conference was streamed live on the Premier Boxing Champions YouTube page and can be watched HERE.

TGB Promotions promote the May 1 event. Tickets are on sale now and can be purchased at AXS.com. Dignity Health Sports Park will be open to fans in a limited capacity, with all guests remaining socially distanced and subject to local and state health guidelines throughout the event.

Here is what the fighters had to say Thursday: 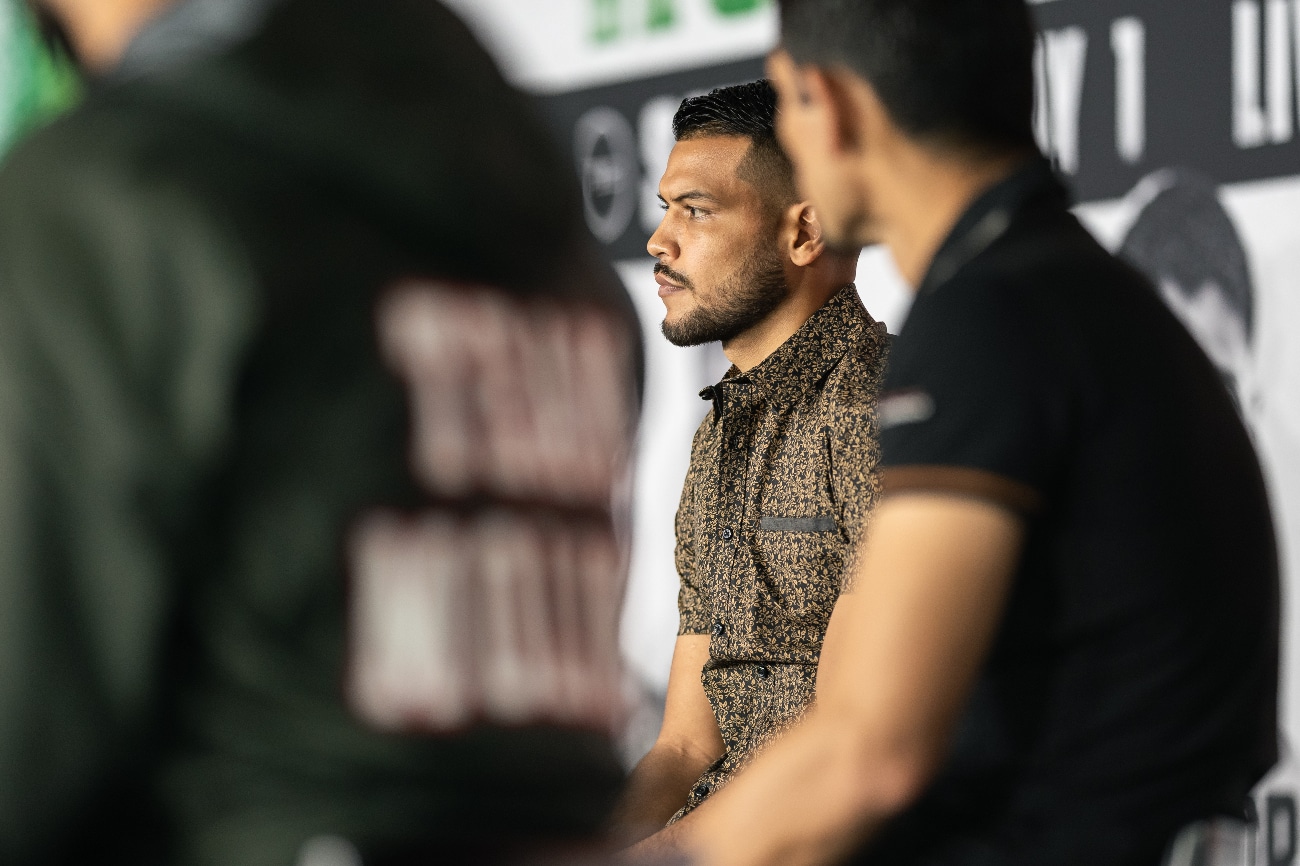 “I’m really thankful to my team for believing in me and everyone who helped me along the way. I’m going to show everyone my very best in the ring on May 1.

“We had a wonderful training camp. I’m finally healthy. We had a camp like I used to have 10 years ago when I was just a young kid full of hope. Everything has gone great.

“I’ve gotten rid of all the bad stuff physically that was looming over me in recent years. We had no distractions in training camp, and we were able to work.

“I go in there to end fights as soon as possible. With that mentality, I’m going to make sure he’s not making it to the sixth round.

“I’m going to show that same aggression like I always do on Saturday, but more refined. I’m going to be a much more efficient fighter.”

“I’m happy to be here, and I’m excited to kick off Cinco de Mayo festivities with this great card. I can’t wait for all of these fights, as well as my own.

“This is the type of exciting fight the fans are going to enjoy. When I was a kid, I always wanted to watch this kind of close combat matchup. That’s what we’re going to have on Saturday. Whoever wants it more is going to win this fight.

“I can’t wait to see the fight between my nephew Jesus and Javier Molina. It’s going to be explosive. I’ll have to keep my excitement at a normal level because I’m still going to have to go out there and perform myself.”

“I’m thrilled to be here and fighting in front of fans. It’s exciting to have fans there Saturday to watch us at one of the meccas of boxing.

“We’ve had two great camps for Cota, so we’re prepared for anything he’s going to bring. I would tell Cota to bring his best because we’re coming to win.

“We trained to get the knockout. My dad always tells me not to leave it to the judges, and that’s what we’re going to do Saturday. 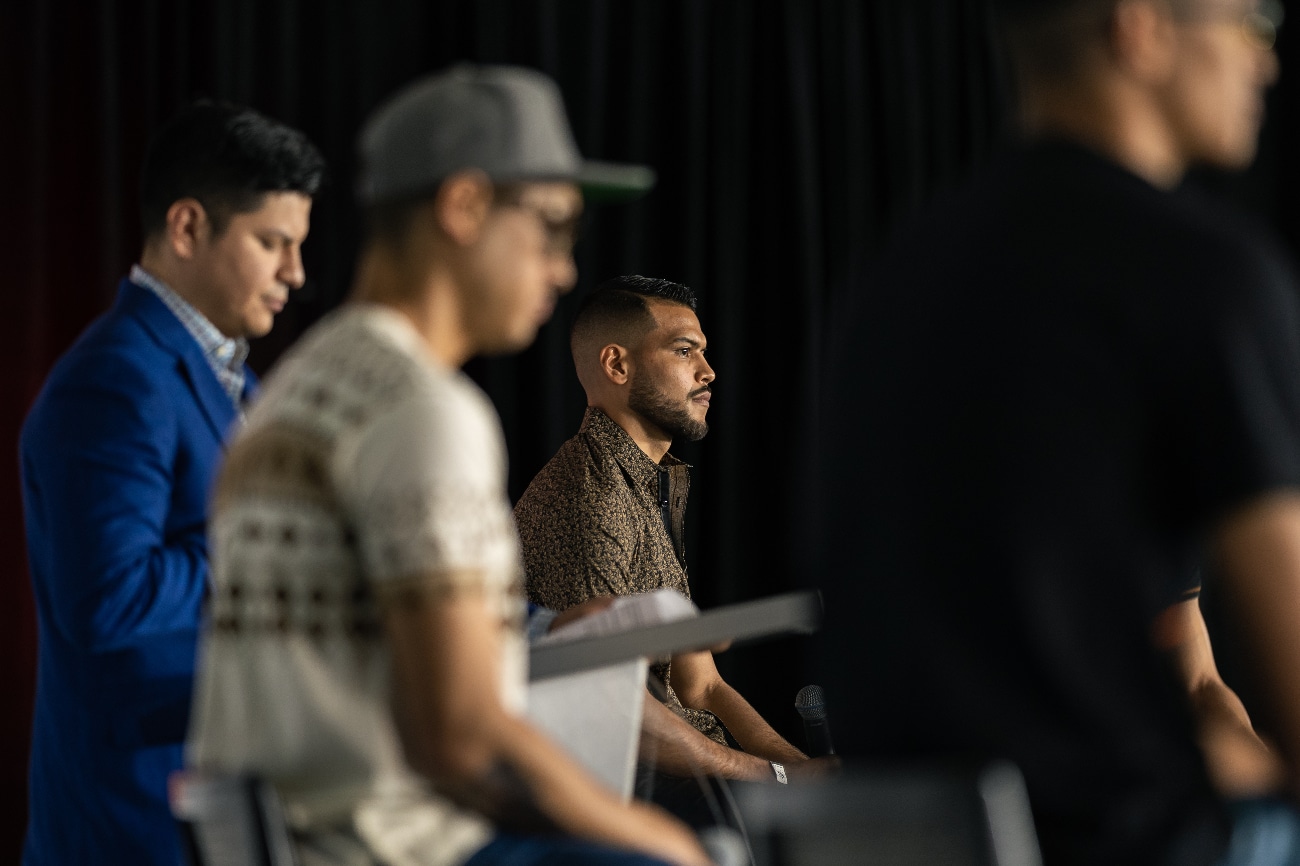 “I love that Cota comes forward. He says he’s planning to make it a war, and that’s what I’m ready for. I wouldn’t expect anything less from another Mexican warrior.

“It’s in my blood to fight toe-to-toe. We Mexicans have the pride of the warrior. I love to mix it up.”

“I want to show what I’m capable of on Saturday. I’m always eager to go, and I feel as prepared as ever for this fight.

“Fighting someone undefeated like Fundora motivates me a lot. These are the challenges that I live for. I’m up for a fight like this anytime, anywhere.

“This fight is going to steal the show. I stand by what I said last time concerning knocking him out. I don’t think there’s any way this fight goes 12 rounds.

“There is no message to send right now. My message is going to be plenty clear on Saturday night.”

“This is going to be a tough fight. He’s got a lot of experience. I expect nothing less from him than a great fight, but I’m prepared. I’m ready for the best Javier Molina.

“I feel like I’m ready for this big step up. To get to the next level, I have to beat guys like Javier Molina. I’m prepared for this level of competition.

“It’s huge for my family to have me and Abel share this card. We used to watch the pay-per-views together, and now we’re a part of one. It’s big, and I can’t wait for Saturday.

“The Mexican fans tuning in to kick off Cinco de Mayo week are going to be in for a treat. It’s going to be a great fight. I’m coming to win. If the knockout presents itself, we’re taking advantage of the opportunity.”

“I’m excited to be fighting a good young fighter Saturday. I’ve been training hard for two months, getting ready for it. I can’t wait to put on a show in front of my people close to my hometown.

“Ramos is a good undefeated fighter. A win over him will get me to the next level, and that’s what we’re looking to do on Saturday.

“My experience is definitely going to play a role in this fight. We’ve watched his fights. He has a lot of talent, but he hasn’t been in there with anyone in my class. I know he’s hungry, though, so I have to be 100% prepared.

“He has a good team behind him, so I’m not too focused on if he’s ready to go the distance. I have to be ready to do my job. Whether it’s a decision or knockout, we’re getting the win.”

“We are so ready for this fight on Saturday. We’re going to see how this fight goes, but no matter what, my goal is to put on a great show for the fans.

“I have talked about moving up to 160-pounds for a while. My team asked if I was ready, and I jumped on the opportunity. I’m open to big fights at 154-pounds, but right now, I’m going after the middleweight crown.

“I came here to fight. If he’s coming to knock me out, then I’m coming to take him out first. I’m excited about this fight. Everyone has tried to knock me out; we’ll see if he has what it takes.

“I have plenty of experience, and he can say whatever he wants, but I’m going to be ready. I’m looking to knock him out in round four or sooner.”

“I’m grateful for this opportunity. I trained my entire life for this one moment. Every fighter dreams of becoming a world champion, and Saturday, I’m going to fulfill those dreams. It’s going to be a huge statement.

“I’m fighting a bonafide world champion, but at the end of the day, I’m hungrier than him. I want this more than anything. I’ve trained hard for the last nine weeks to make sure I secure that victory. No matter what it takes, I will become champion on Saturday.

“I’m hoping the fans see that I belong at this high level. I belong here. Win, lose or draw, I’m going to earn that respect.

“I’m coming to knockout Erislandy Lara. That’s the goal, and that’s what I’m going to accomplish. This is my one shot, and I’m going for it.”

“I want to let everyone know that I’m ready to put on a show Saturday night. I’m going to keep piling up the wins with this fight against Avelar.

“It’s going to be a great fight, and like always, I expect myself to come out with a win. I’m ready to get the win no matter what I have to do.”

“I’m really motivated and excited to give my all in the ring on Saturday night. I’m going to leave everything in there against Eduardo Ramirez.

“I’m thrilled to be competing on this card. This is a great event and a great opportunity to showcase what I’m capable of in this fight. I’m ready to show everyone what I can do.

“People can expect this to be an exciting fight. We both want this belt, and we both want to win. We’re going to give it our all and provide the fans with a great show.”

Billy Joe Saunders Did All He Could