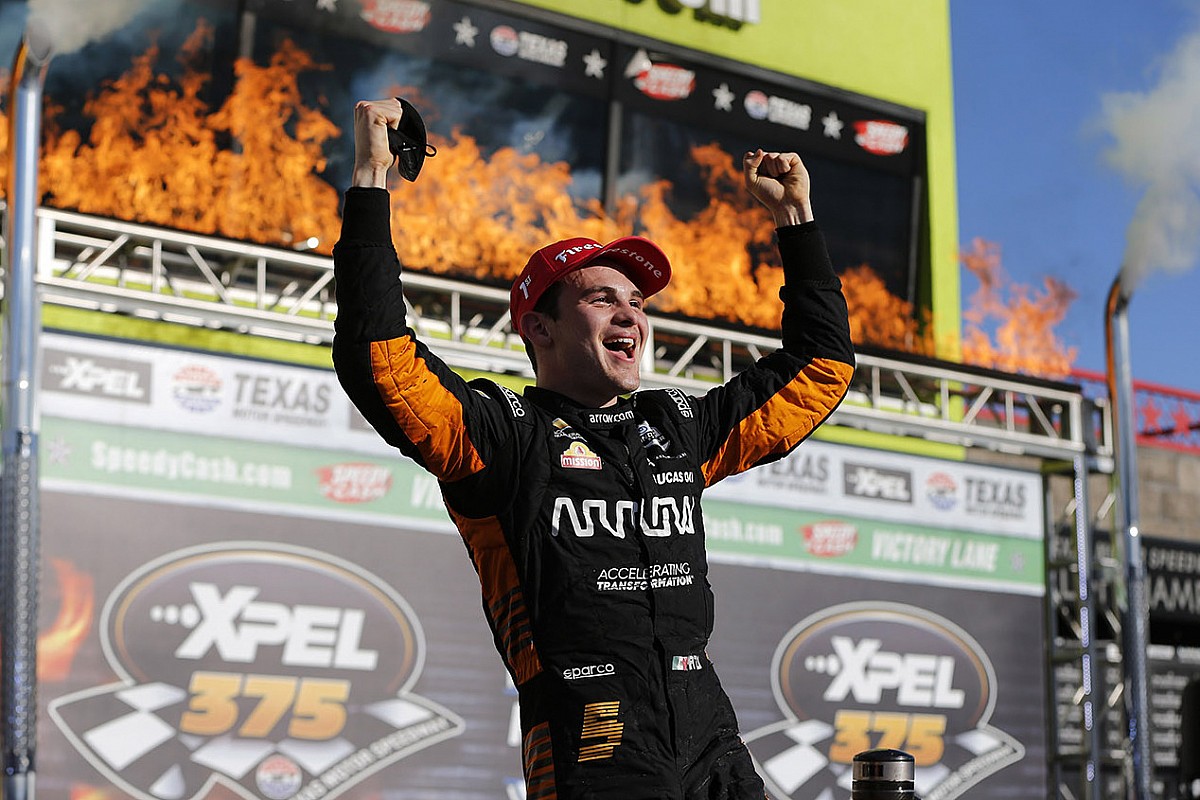 At the start, a six-car shunt eliminated both AJ Foyt Racing-Chevrolets, both Dale Coyne Racing-Hondas, the sole Carlin-Chevrolet of Conor Daly and Alexander Rossi’s Andretti Autosport-Honda. It was especially heartbreaking for Sebastien Bourdais, a double DNF in team owner AJ Foyt’s backyard, despite being an innocent victim in both shunts, and for Rossi whose championship hopes look horribly tattered just four races into the season.

At the restart polesitter Scott Dixon sprinted away from Chip Ganassi Racing-Honda teammate Alex Palou, while Jack Harvey’s Meyer Shank Racing-Honda sprinted past both Pato O’Ward’s Arrow McLaren SP-Chevrolet and Will Power in the Team Penske-Chevy.

Colton Herta’s Andretti car initially held 11th, but he was passed by both Felix Rosenqvist in the Arrow McLaren SP and Marcus Ericsson’s Ganassi entry.

After 50 laps, Dixon led Palou by half a second, the pair of them four seconds clear of Harvey who was backing Power into O’Ward.

O’Ward made a concerted effort to pass Power down the inside of Turn 3 that involved using some of the flat apron, which looked distinctly sketchy, but the 2014 champion held on. T

Dixon, O’Ward and Pagenaud all pitted on Lap 72, with Harvey, Power and Rahal going one lap longer, and Newgarden two laps longer. VeeKay ran longest of all but it didn’t prove worthwhile, and he came out in 15th, behind his team owner Ed Carpenter.

Newgarden emerged ahead of O’Ward and the pair of them jumped Power in the pitstop exchange. Newgarden swiftly moved past Harvey to take third place, leaving the MSR driver to try and fend off O’Ward.

Newgarden didn’t escape from this pair however, and by Lap 100 he had them in his mirrors, while the Ganassi pair were four seconds ahead and around half a second apart, depending on traffic.

Further back, Arrow McLaren SP had vaulted Rosenqvist into eighth, ahead of McLaughlin and Pagenaud, and watching Power and Rahal battle for sixth.

O’Ward finally passed Harvey around the outside into Turn 1 on Lap 114, and it signaled the end of the MSR driver’s day, with a suspected right-rear wheelbearing failure, similar to what happened to his semi-teammate Herta in last night’s race.

The caution flag flew and that prompted everyone to pit. The pitcrews of Power and Rahal did a spectacular job to get their drivers up to second and third respectively, while Newgarden and O’Ward also beat Palou across the pit-exit stripe. Rosenqvist remained ahead of the other two Penskes but now seventh as a result of Harvey’s demise, while Herta completed the Top 10.

The restart came on the end of Lap 128, and Dixon made the most of his advantage, while O’Ward made a superb move to the outside of Rahal, while teammate Rosenqvist got around Palou, as did Pagenaud. McLaughlin by contrast, lost momentum and fell to 11th behind Ericsson and Herta.

O’Ward kept charging and got around Power, and on Lap 134 Rahal also demoted Power – and then dealt with O’Ward down the inside of Turn 1 and closed on Dixon. On Lap 141, the 2016 Texas winner went around the outside of last night’s winner on the front straight to grab the lead.

However, with the teams trying to complete the 248-lap race on just one more stop, Rahal was ordered to take it easy, which backed Dixon toward O’Ward, until Dixon re-passed the RLL-Honda on Lap 153, with Graham not putting up any resistance. The lap speeds had dropped some 10mph off their best laps, dropping from 215 to 205mph.

On the fringes of the Top 10, Ericsson ceded two spots to Ed Carpenter and McLaughlin on Lap 156, and 13 laps later the Ganassi #8 ducked into pitlane.

Pagenaud and McLaughlin started the last round of stops on Lap 184, while Dixon and Rahal pulled off on lap 186, Dixon just beating his closest rival away from their respective pitboxes. Rahal passed Dixon for the lead at Turn 1 on their first lap out but both were now trailing O’Ward who had gone a lap longer.

However, the other Arrow McLaren SP car of Rosenqvist was in trouble as his right-rear wheel fell off at Turn 3, and the subsequent caution fell just as Newgarden emerged ahead of his suddenly slowed rivals. He was in second on track, however, behind the off-strategy Sato.

At the drop of the green on Lap 197, Herta passed Pagenaud, and as the Frenchman moved up the track to give him room, he discovered teammate Power on his outside. Somehow Power kept it off the wall while skimming through the marbles, but he tumbled down to 14th.

On Lap 202, Newgarden moved past Sato, and O’Ward would soon follow. Sato eventually made his final stop on Lap 211.

O’Ward closed on Newgarden and tried around the outside of the Penske driver at the start of Lap 225, tucked in behind, and then dived down the inside at Turn 3 to take the lead.

He swiftly pulled a second on Newgarden, who had a 1.4sec margin over Rahal, and the Arrow McLaren SP driver seemed to have no fuel issues as he kept inching away from the Penske.

O’Ward finally crossed the line 1.24sec ahead of Newgarden, with Rahal 4.4sec down and just 0.4sec ahead of Dixon.

Herta was the highest finishing Andretti Autosport driver in fifth, ahead of Pagenaud, Palou, McLaughlin, VeeKay and Hunter-Reay.

As well as being the former Schmidt Peterson Motorsport squad’s first win since James Hinchcliffe triumphed at Iowa in 2018, it was the McLaren marque’s first triumph since 1979. The cherry on the cake was the presence of Lone Star J.R., Johnny Rutherford, who scored that last McLaren win.