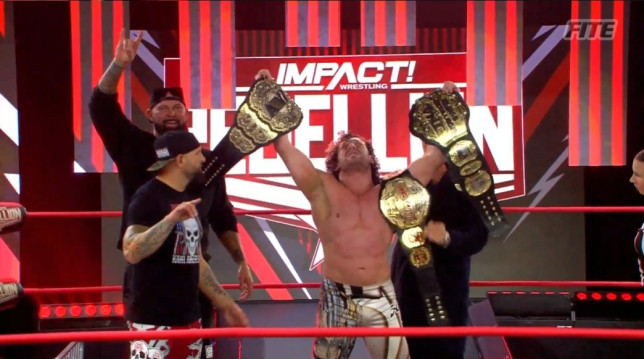 The era of Kenny Omega as Impact World Champion began just as everyone expected it would. You know, Scott D’Amore threatening to strip him of the belt and have him ‘indefinitely suspended’ from both Impact and AEW in the opening two minutes of Thursday night’s broadcast, with Omega then only appearing as advertised two minutes before the show went off the air. Just as you expected it to pan out, I’m sure.

I’ll tell you this for free – it’s not what I expected. If you asked me what I did expect, I’d have probably laid out something that sounds fairly familiar. The new champion, flanked by his manager and friends, cuts a fairly bog-standard promo in the ring before a procession of future challengers head to the ring to set up a slew of future matches. You know why it sounds familiar? Because it’s the same routine we’ve seen for years and years and years. You’re conditioned to expect it and when you don’t get it, there’s a bit of your brain that says ‘no, that’s not how you do it, guys’.

On first viewing that was exactly how I saw it. The WWE conditioning kicked in and I thought the presentation was wrong. Yet, a little period of reflection later and I find myself rather onboard with it all.

This is a totally new dynamic. When was the last time we had one wrestler as champion for two leading promotions in the same country? It is, to use one of the pandemic’s buzzwords, wholly unprecedented. There is no blueprint for Impact to follow, and that allows for experimentation. That allows them to challenge that conditioning we’ve come to expect. This whole story is a break from the norm and that’s why the whole narrative through the show and Impact’s initial presentation of Omega as champion worked a treat for me.

Kenny not appearing until the end of the show and then only doing so to a) retain the belt on a technicality and b) attack two potential future opponents was pitched just right. It rammed home the story that they’ve been telling since the very first segment with him last year. That night, on the bus, he spoke to Josh Mathews about his love of comic books as a child and his desire to collect as many as possible, particularly rare and notable editions. He said that as he’d got older, his attention had switched to wrestling titles and now he wanted to collect them as well. The inference was clear – capturing the Impact World title was always the lure for Kenny, there was never a preconceived notion or desire for anything beyond that. He just wanted another strap of gold for his growing collection. Defending the belt, let alone appearing on Impact, were irrelevancies once his initial goal had been completed.

Having him rock up at the end of the show and interrupt a qualifier for the six-man contender’s match at Under Siege furthered the idea that Impact is a very low priority for Kenny. They didn’t need to give him more heat, he’s always going to be the heel. But doing things this way means the existing face/heel dynamic on the Impact roster is muddied – everyone will be a face going against Omega because they’re fighting for the promotion.

That dynamic was made clear with the opening to the show proper and Scott D’Amore’s announcement of the Under Siege six-way for the first one-on-one shot at Omega. He announced it with the entire roster on the outside. Faces and heels. Top of the card and bottom of the card. The match won’t involve everyone, but it was clear that the fate of the title absolutely does. They’re all working for a promotion now without a champion that they can call their own.

My favorite jolly Canadian also noted the lack of an automatic rematch for Rich Swann. Automatic rematches have always annoyed me on a personal level – in any promotion that aims to have that ‘sports-like’ feel, they should be the exception, something specifically added to one of the many feted contract signings, rather than a general rule. They’re lazy booking. Avoiding it here made sense given the two belts at play and it also allows them to give Swann a break before bringing him back for another program with Moose.

The six-man contender’s match is also being set up with several interesting avenues that they could explore. Chris Bey would be an odd choice perhaps for the first challenger but he’s something that would be hugely elevated by the spot. It could be Matt Cardona, offering him an opportunity to tap into some of his post-WWE baggage. Chris Sabin was involved in the six-man tag at Hard to Kill that did good business, he’s a former World Champion and a man who probably bleeds Impact. Moose is peaking in-ring, he was presented strongly in that aforementioned Hard to Kill match, particularly when in there with Omega, and they could work with the size difference. Sami Callihan has had issues previously with Don Callis, a subplot they’ve already partly addressed, he was attacked by The Elite and he’s always touted himself as one of Impact’s workhorses and landmark attractions. He’s also used to losing in big spots so there’d be no changes there.

Whether this Omega run can genuinely elevate someone in Impact remains to be seen. Indeed, it might be that he doesn’t drop the title to a member of the current roster at all, but instead to an outsider (Kazuchika…) or a returning hero (cough, Samoa Joe, cough). Whoever it is, and however Impact has presented Omega to date, the story is working from a business perspective. Hard to Kill and Rebellion have been two of the highest-grossing PPVs for the promotion since the Spike days and the TV show is the only major US weekly TV wrestling show up month-on-month. Whatever Booker T says, it is doing good numbers.

The era of Kenny Omega as Impact World Champion began in earnest this past week. It wasn’t what I expected but I’m so here for it.