A different point of view. The wrestling world is getting more attention than it has received in quite some time, but not exactly for wrestling. Instead, we are seeing various television shows, documentaries and more looking at a different side of the industry. That is going to be the case again as we are getting a new series about the wrestling world. Now we know a lot more about what is coming.

A first trailer has been released for the upcoming Starz wrestling themed series Heels. The show will be debuting on August 15, 2021 and stars Stephen Amell and Alexander Ludvig as brothers trying to control their father’s wrestling promotion. The series will also feature CM Punk in a role as another wrestler.

This has potential. Check out the first trailer for the series:

Amell has a bit of a history with wrestling, as he wrestled three matches, including at Summerslam 2015, Ring of Honor Survival of the Fittest 2017 and All In. There is no word on if any other wrestlers from another other promotions will be making appearances on the series.

Opinion: This is the kind of series that has some potential as the inside world of wrestling has some fascinating concepts. Looking at a smaller promotion and the intricacies that are involved could be awesome. However, it could also be a mess if the show does not exactly get how wrestling works. I have been wanting to see how this show will go though and that is a good feeling to have going into something like this.

What do you think of the trailer? How will the show go? Let us know in the comments below. 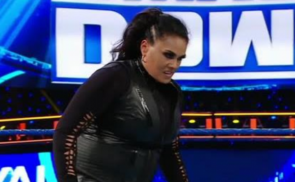 It’s Her Turn: Why Tamina Is Being Pushed In WWE